We left LA with the intention of making it to Ensenada on Thursday night. Due to our slow packing and a delicious brunch provided by David, we didn’t reach the border till much later than originally planned. We had promised everyone that we would not be driving at night so we decided to stay the night at a cheapo motel in San Ysidro and take off early the next day (I also got a bit shaken by a gal in a parking lot in San Diego who scolded me for going into such a dangerous area, but I’d rather my excuse be that we didn’t want to drive at night (she was telling me that I needed to learn how to assemble a cross-bow from scratch… perhaps she wasn’t all there, but I still got a bit shaken)). While in San Ysidro, we chatted with a guy on a little motorcycle who goes back and forth between Mexico and California who gave us plenty of encouraging words and words of advice. Namely (something we should have researched) that tourists are not allowed to carry pocket knives. They are considered weapons and can end you up in jail!! This meant that my pocket knife was to be left behind… Not to mention my machete ;P
Way to do your research Matt… 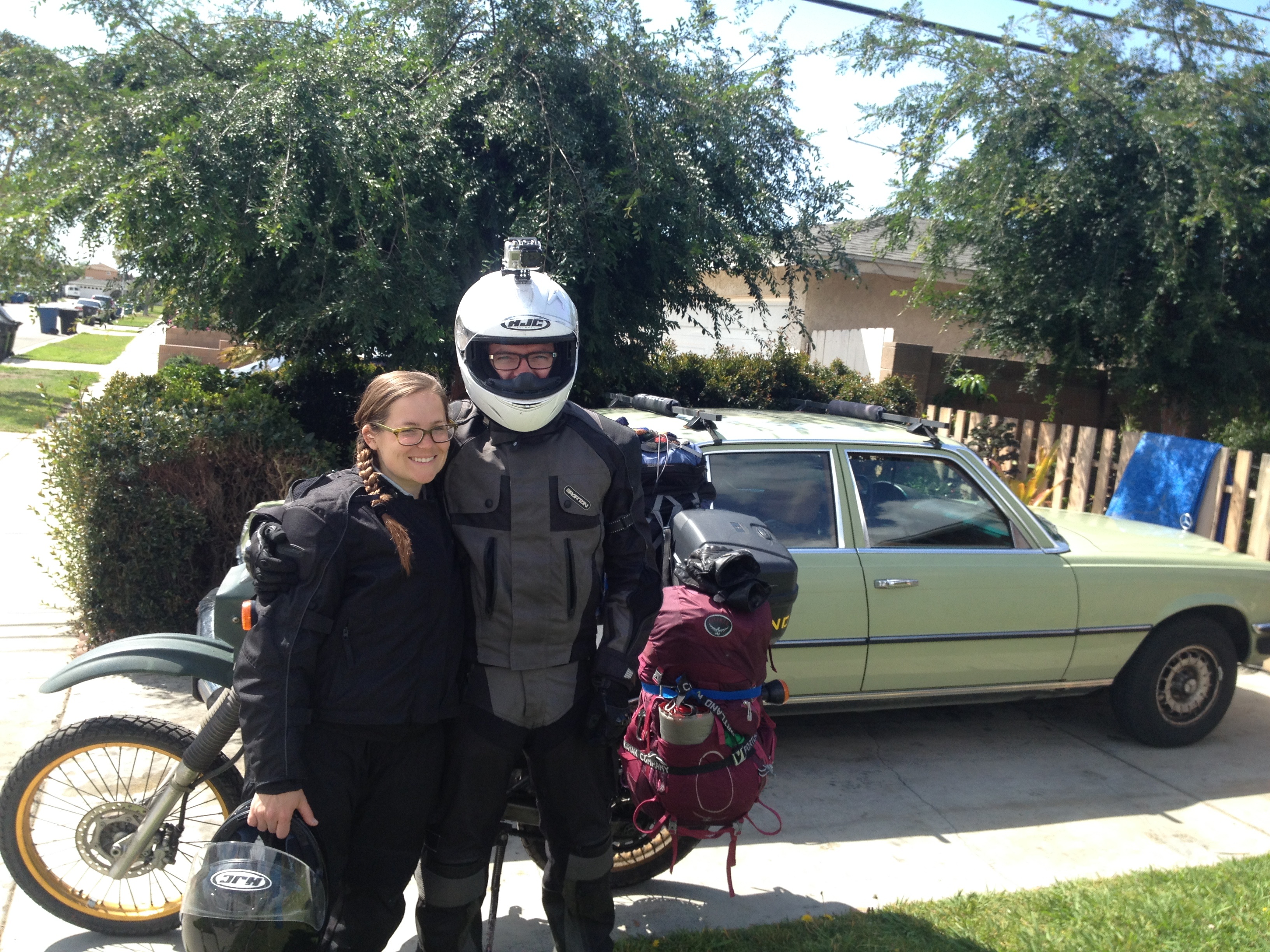 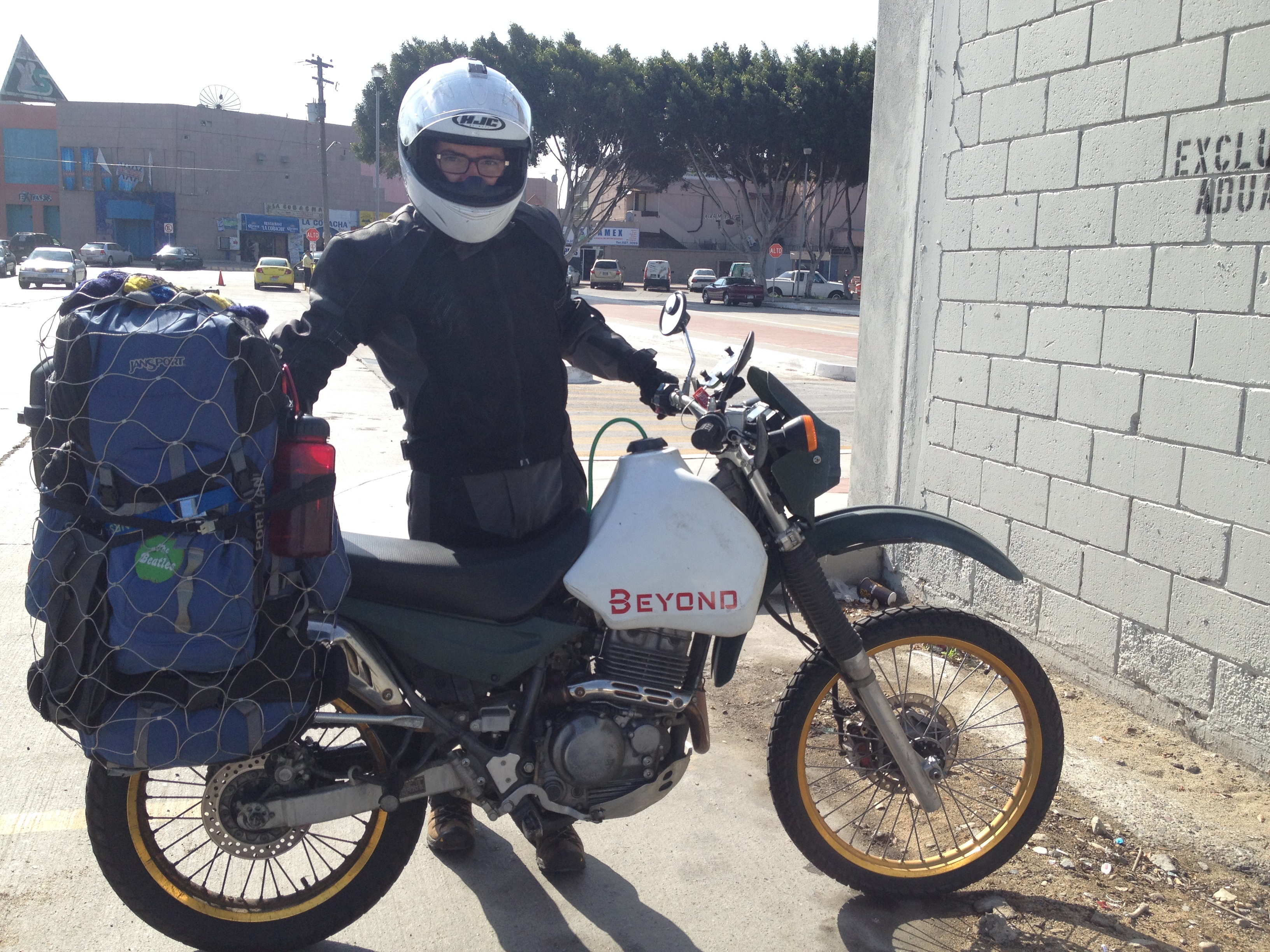 Anyhow, we cruised right through the border without even being stopped. Then we found the immigration office and purchased our tourist visas, and we were off! We paid to ride along the toll roads to get around Tijuana, and then onto the free road from Tijuana and on. We decided that our destination would be a hostel called Campo Cuatro Casas. It is a surfing destination that is a ways off the road. He wanted $20/each to stay there but only $5 each to camp, so we opted to camp. It was a great location ~5miles down a dirt/rock/sandy road and on a wide bay. It was fun watching people surf and we had a great cliff-side tent spot. The next morning the hostel owner cooked us up some delicious breakfast burritos with homemade tortillas. 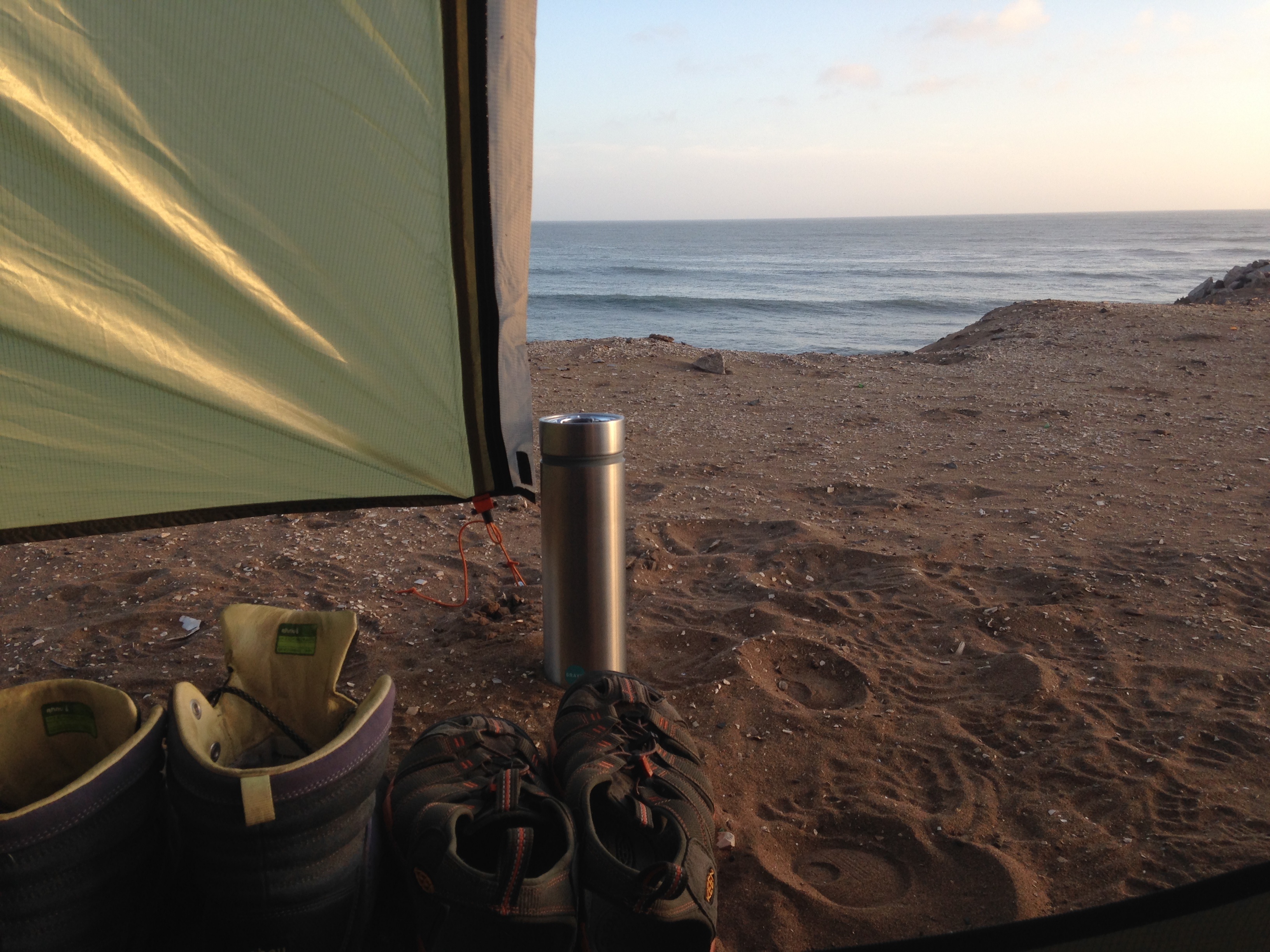 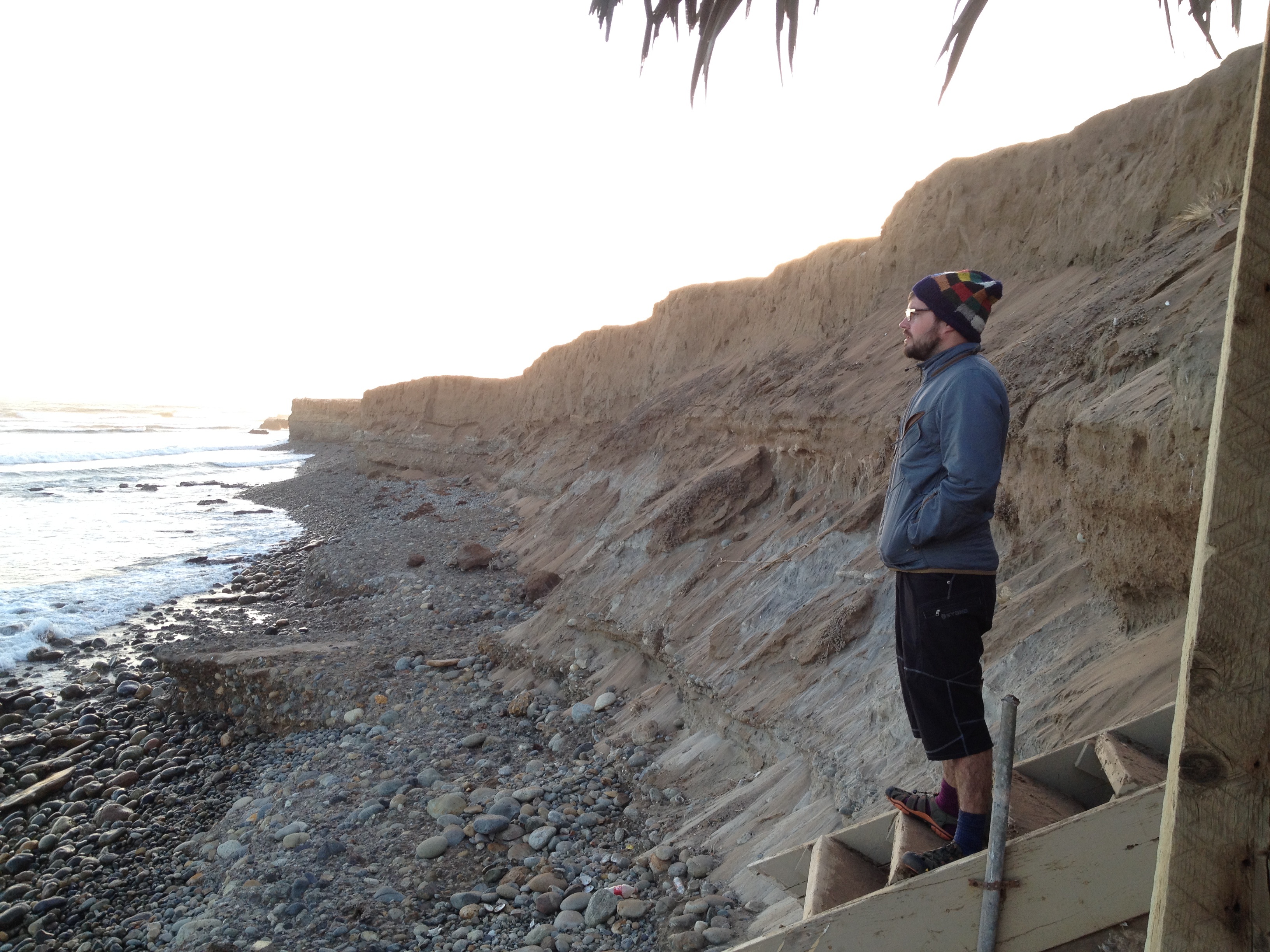 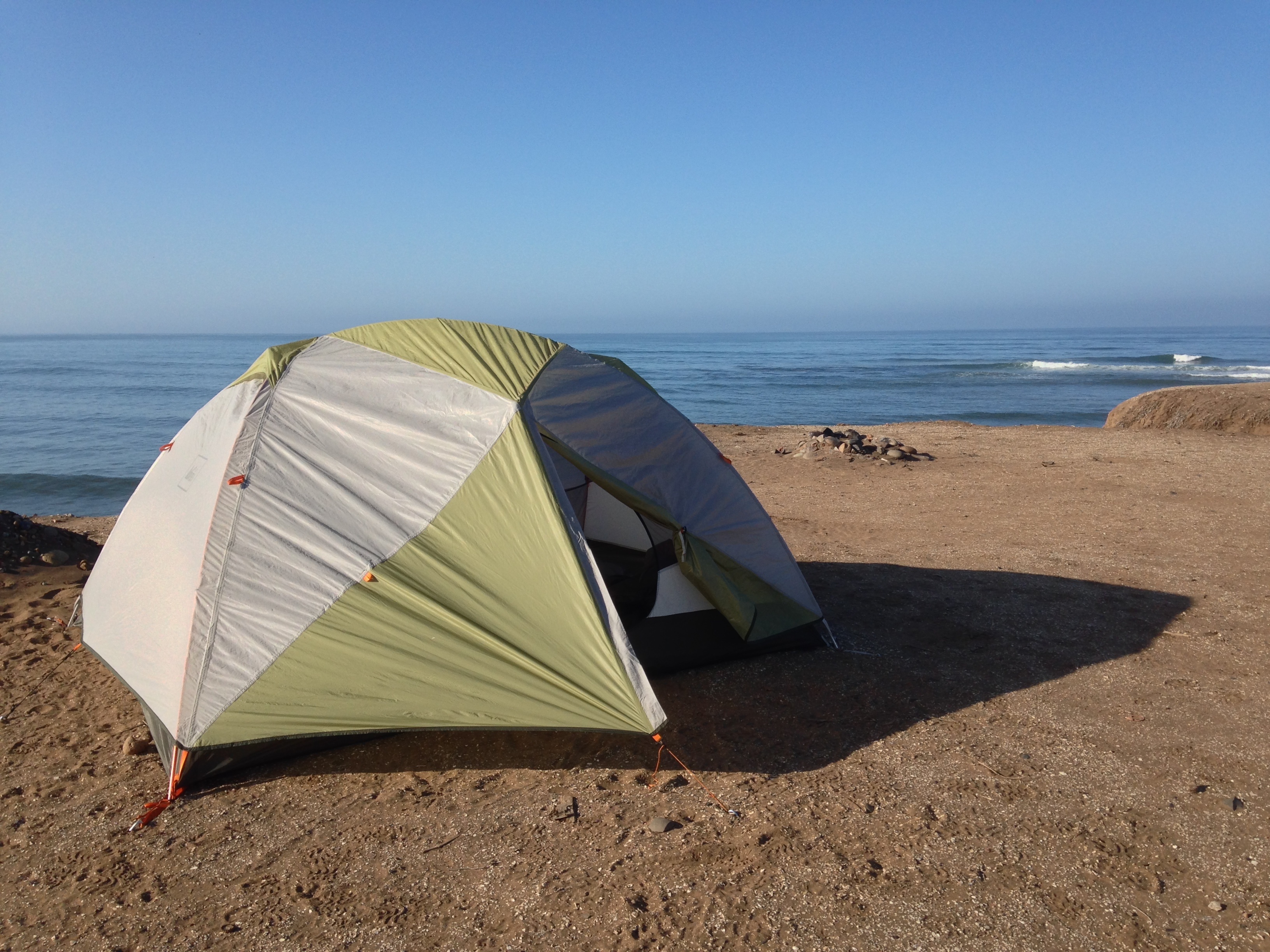 Second day in Baja, destination unknown. We take off from 4 casas a bit late after a delicious breakfast and continue our Southernly journey. The roads are still quite nice (I had been warned of pot-holed roads that could be quite perilous) and more beautiful views. The deserts down here are so fun to drive through with so many unique cactus/plants covering the areas. We stopped for lunch in a small town where Emily finally experienced her first legit Mexican street taco. Was not disappointed! Really were delicious. We decided to keep going as far as we could today as we had no real agenda. We kept an eye on the horizon and as soon as the sun looked to be getting too low and our shadows were getting long we found a little path off the road to drive down a ways to camp in the middle of the desert. After the sun went down, we had a huge 360* view of the night sky. I’ve never seen so many stars! There wasn’t any light pollution, and no large mountains were nearby to intrude on our views. We could see both Mars and Jupiter! It was so so quiet out there at night that it made sleeping a bit creepy; we eventually turned on a bit of music to help us fall asleep. 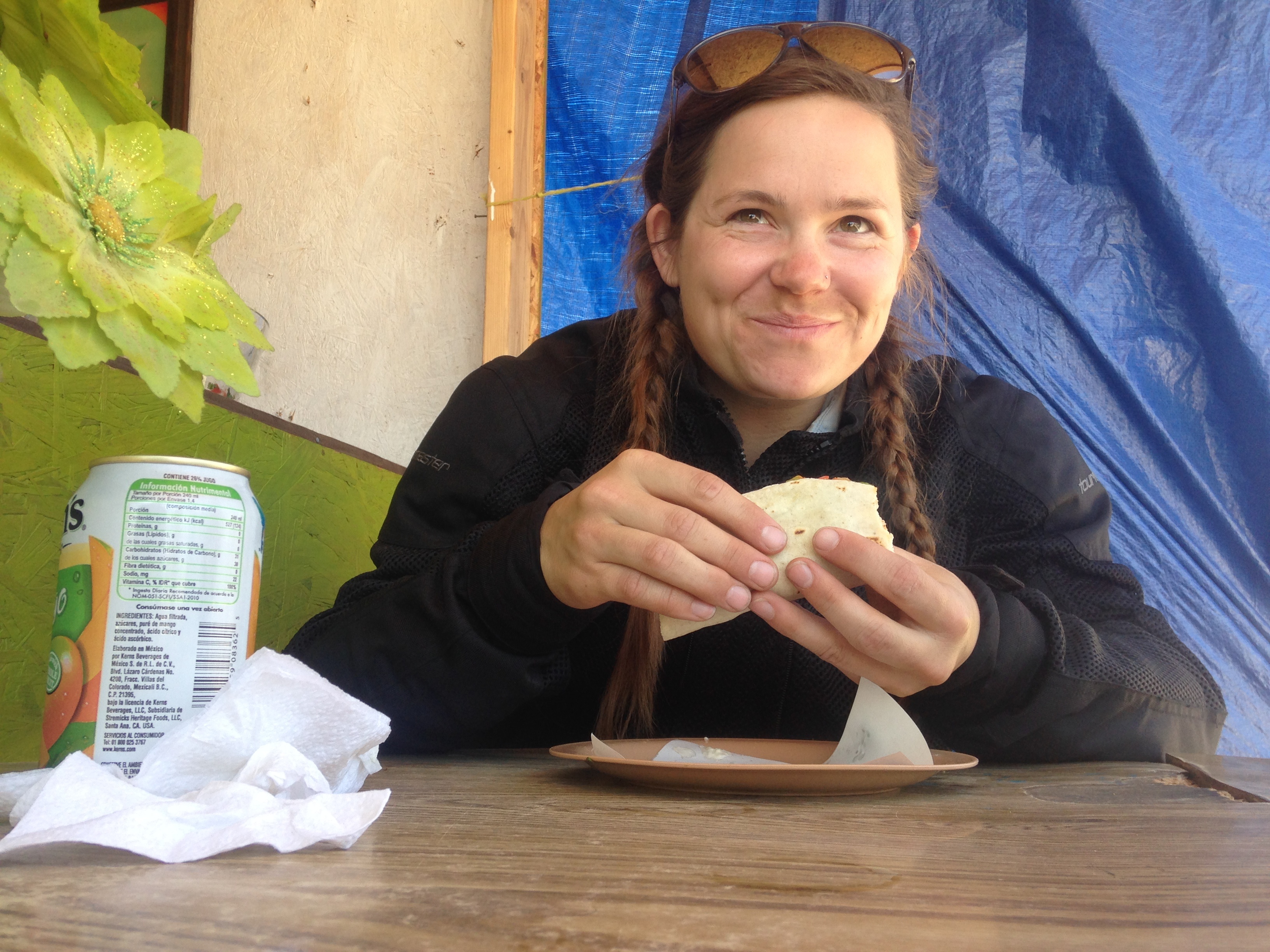 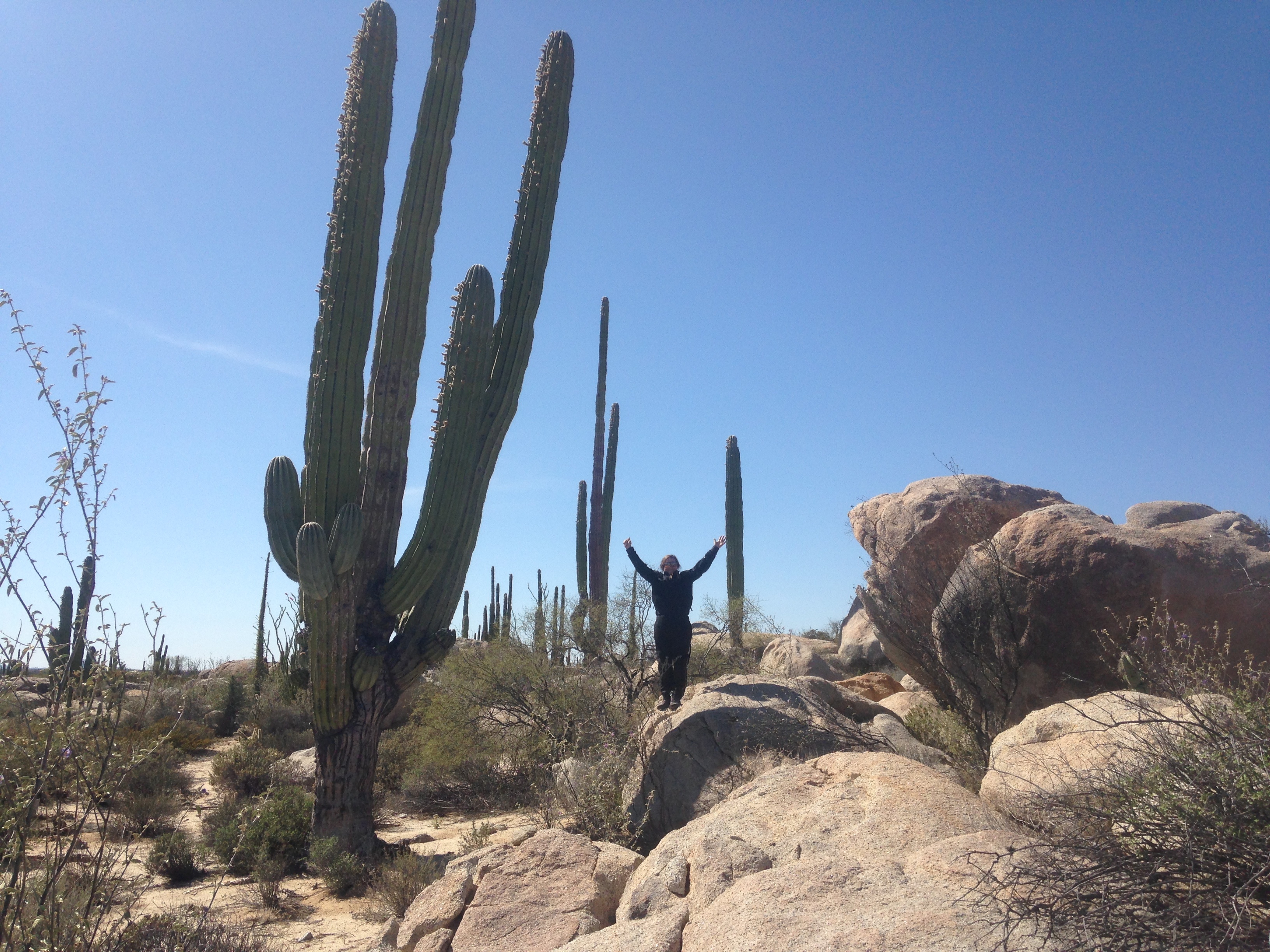 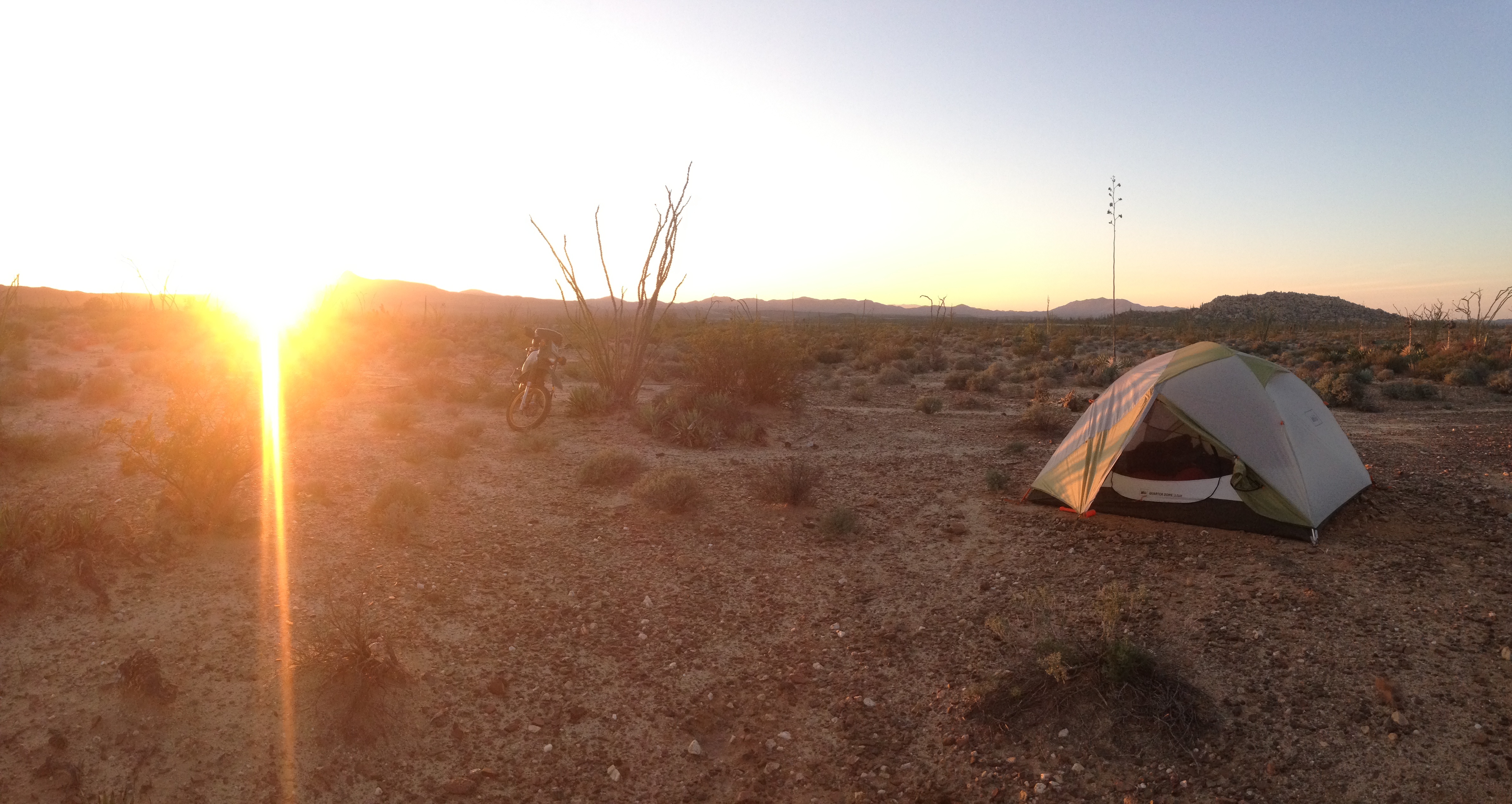 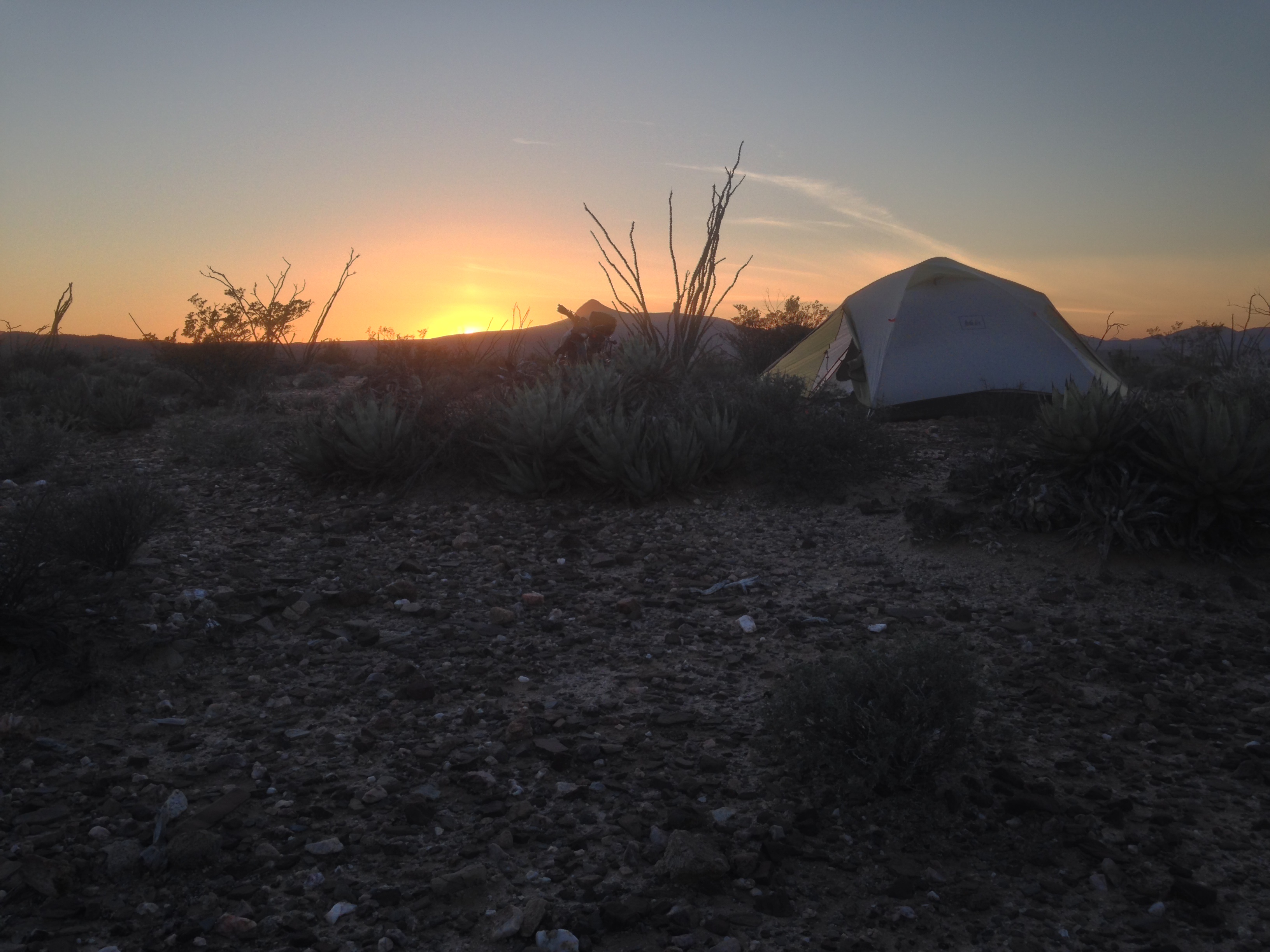 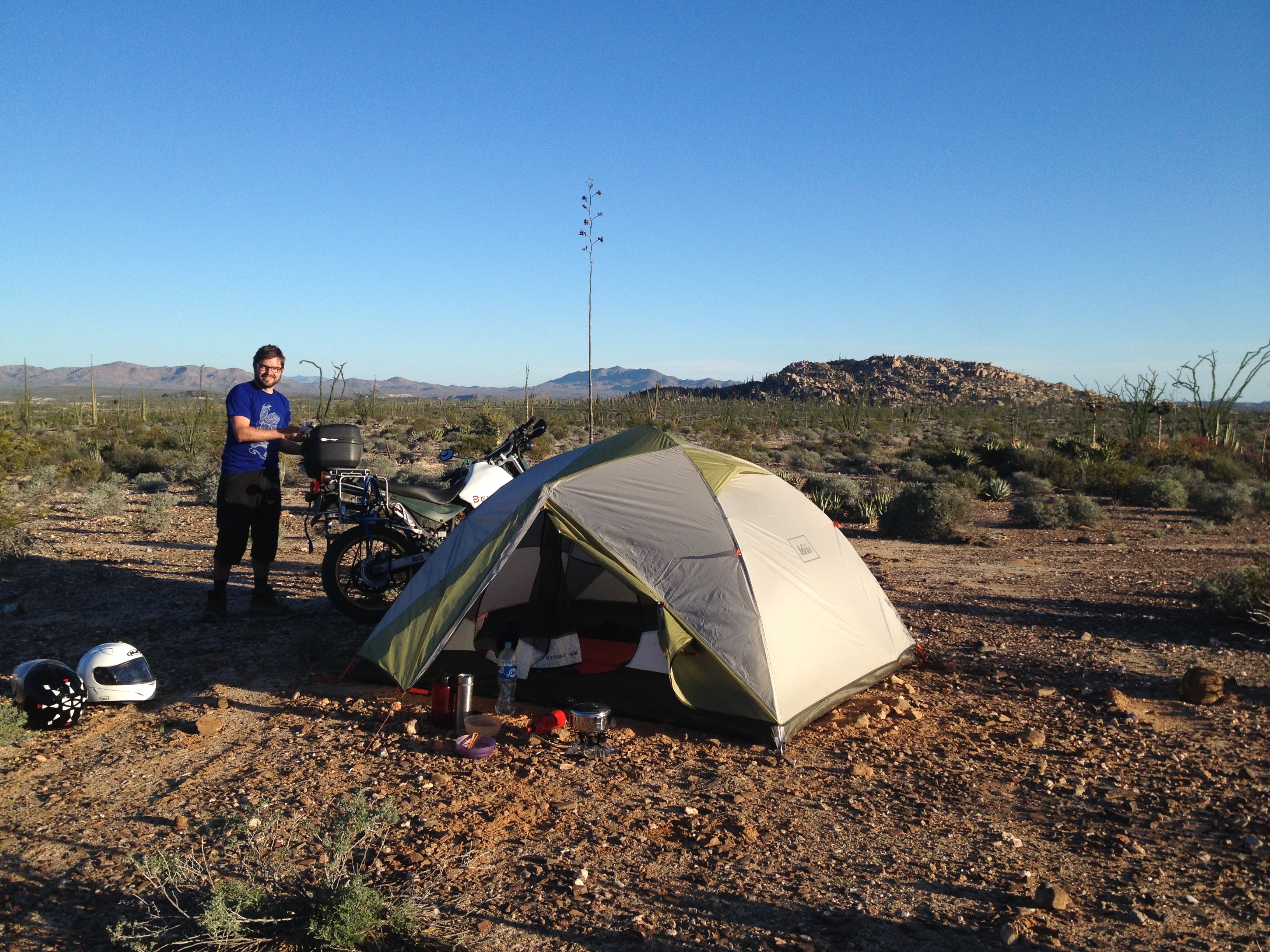 Since we were in the desert, we got up pretty early to try and beat the sun. We got a decent start, but it was still quite hot by the time we finally took off. We quickly cooled off, however, as clouds rolled in and blocked the sun out for the res of the morning. We stopped in Guererro Negro for lunch and coffee then headed down to Mulege and to the beautiful Bahía de Conceptión. We found a private beach to camp on by ourselves (down a rocky path that I almost crashed on twice) and setup camp just as it was getting dark. We pushed ourselves a bit too much today, both our butts were feeling super sore and ready to be done ~1hr before we actually stopped. Pretty rough. But the beautiful views of the Sea of Cortez and our Paradise camping spot kinda made up for it. 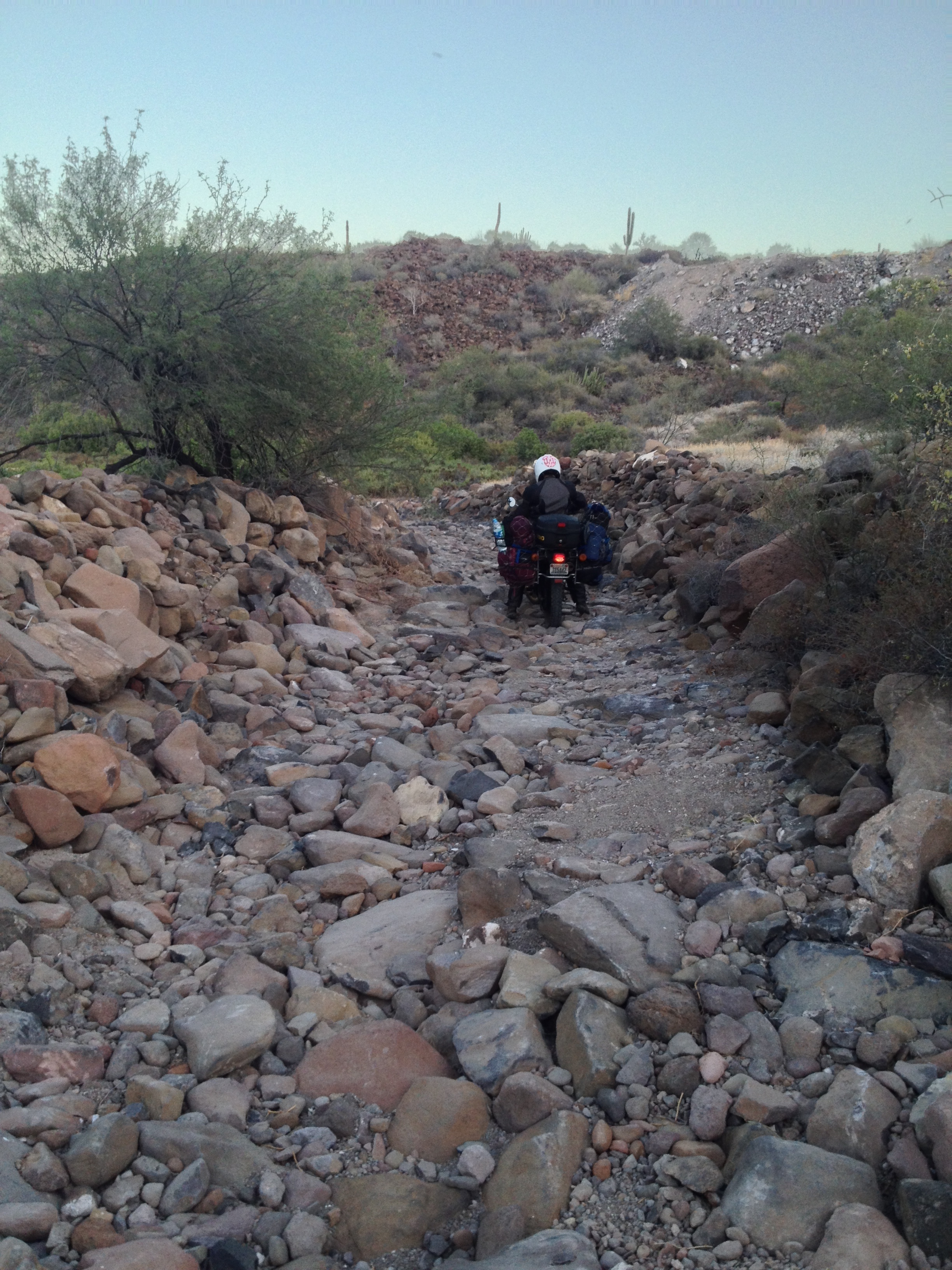 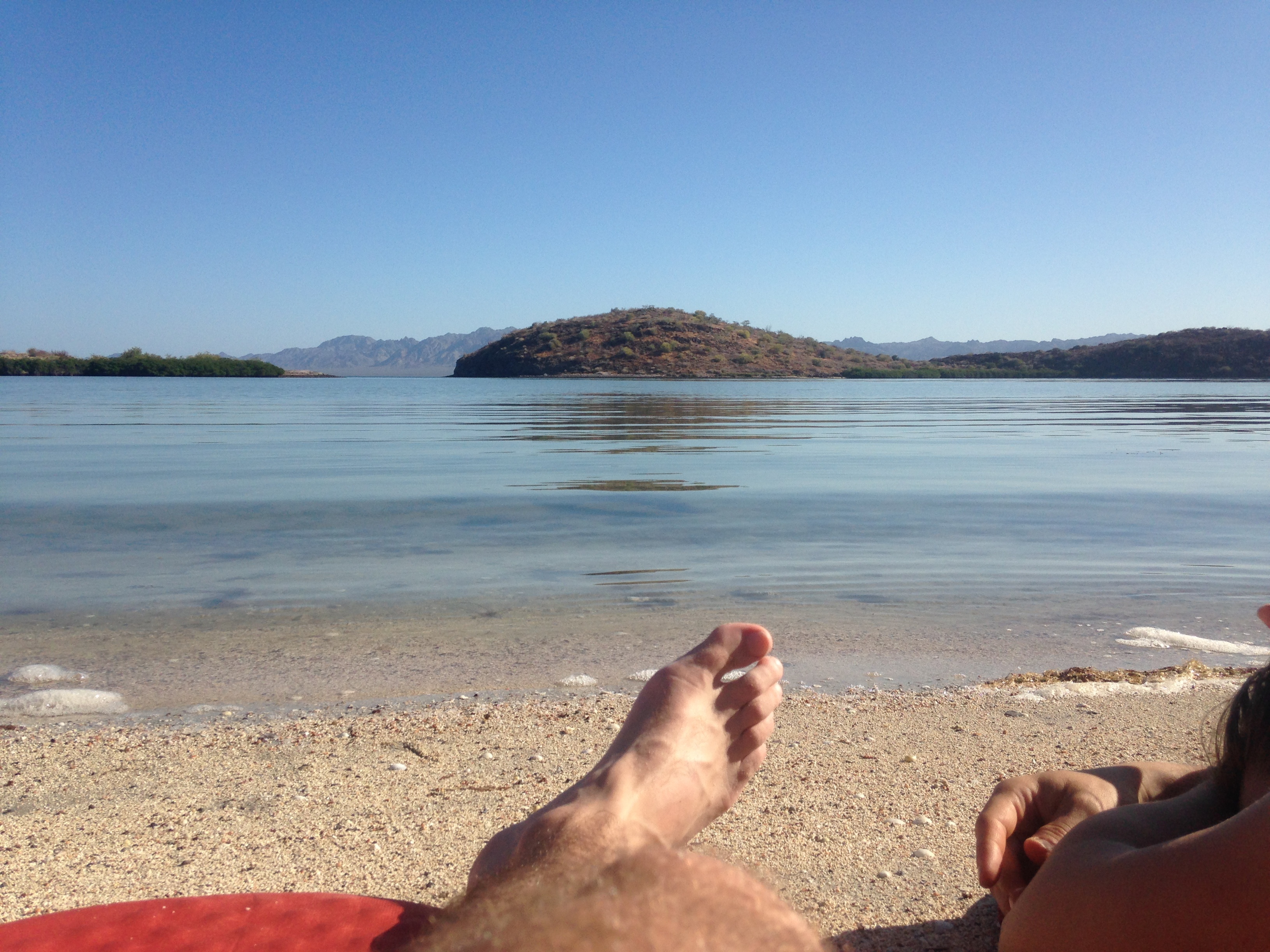 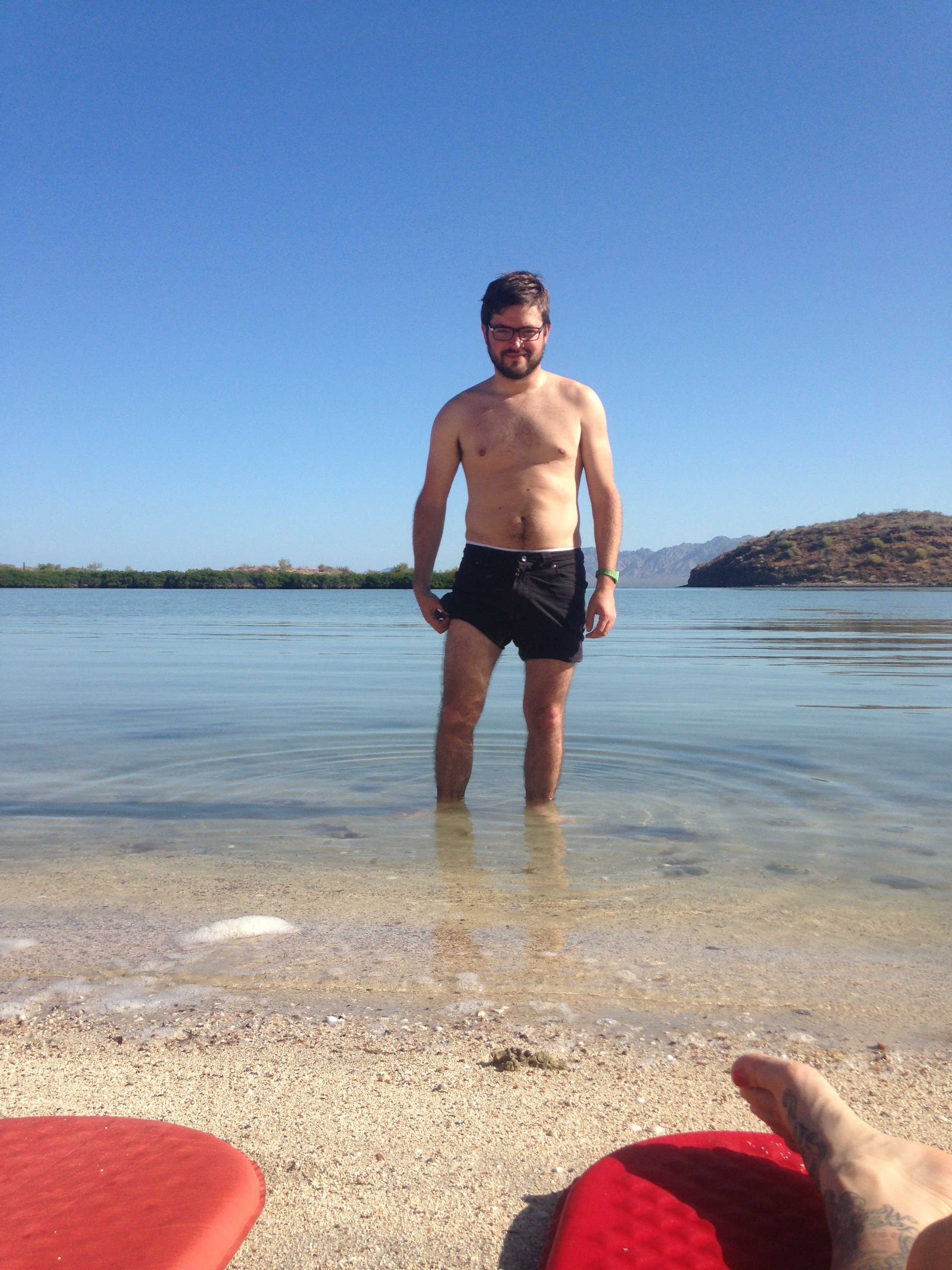 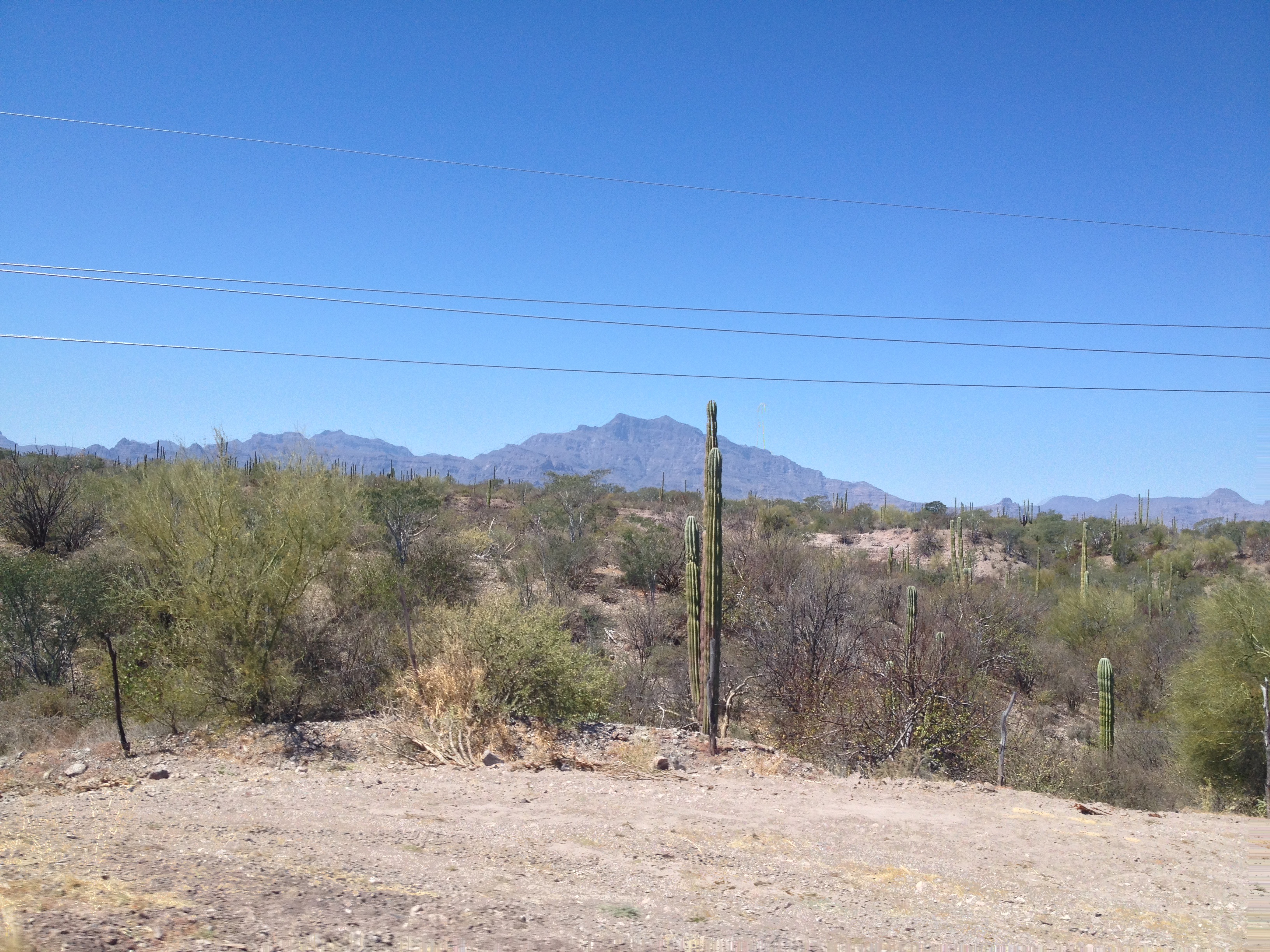 In the morning we were not super motivated to get moving after such a long riding day the day before. Also we were on a gorgeous beach. We pulled our camping mats out and started trying to work on our pnw lack-of-tan. We became sufficiently overheated and tore down camp to head towards Loreto for brunch. Arriving in Loreto, we realized that we really didn’t want to go any further today, and also that Loreto is quite beautiful! We chatted with a super nice hotel owner who was asking more than we wanted to pay, he called around and found a suite for us at one of his friend’s place who has a great house and two units that he rents out from time to time. Having a relaxing time walking around the town and the beach was just was we needed 😉 Showers were nice too! 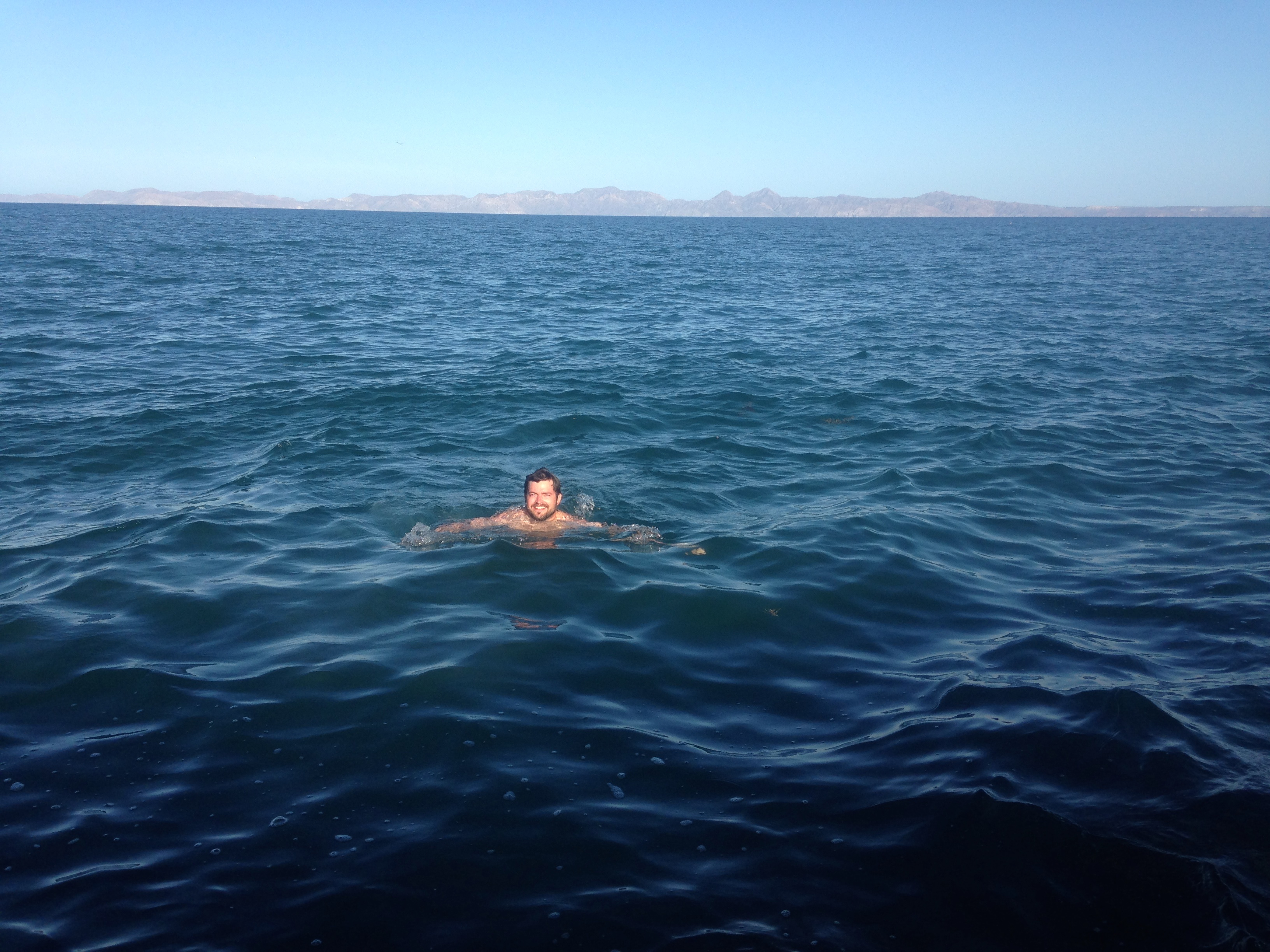